“I see you. You matter. I care what you think about art. To love art is everyone’s basic human right. I have created this work for you... all of you.”

A NEW ARTISTIC PHASE WITH NFTs

In this phase of his creative process the artist Maurice Perdraeu from New York took on a new dimension by centering imagery invoking new age graffiti-inspired art, including moving lines, circling swirls, snake-like circles, in addition to other uncommon and unorthodox figures or representations of cultures the artist encountered in the USA and abroad in Ecuador, Egypt, France and European countries where he studied and lived over several years. They are an exciting and dynamic mix of his many international experiences and lifestyles, both colorful and intriguing, indeed mesmerizing.

All the while, the artist was vitally aware of the power of the image of the heart to all people, no matter their origin, race, ethnicity, religion, creed. or societal background. The image of the heart says love to all, but few artists have delved into the many nuances and modes of the heart. It can say so much more than love. It can transmit hate, jealousy, fear, anger, sadness, loneliness, delight, and so much more. So, the artist, in his endless and continuing quest of originality, created 400 NFT heart art images over three years, each unique and speaking in its own way in its own universal language. Maurice Perdreau’s Heart Art is universal in its messages and its power to appeal to the emotions and dreams of anyone viewing them

The artist started drawing while taking classes at the Institute of Sciences Po in Paris to relieve the high stress of academic pressure in France’s most prestigious Grande Ecole. The magnificent Pont Alexandre III was the starting point his eye discovered as he strolled along a wide avenue after an afternoon of intensive study of French Republics. 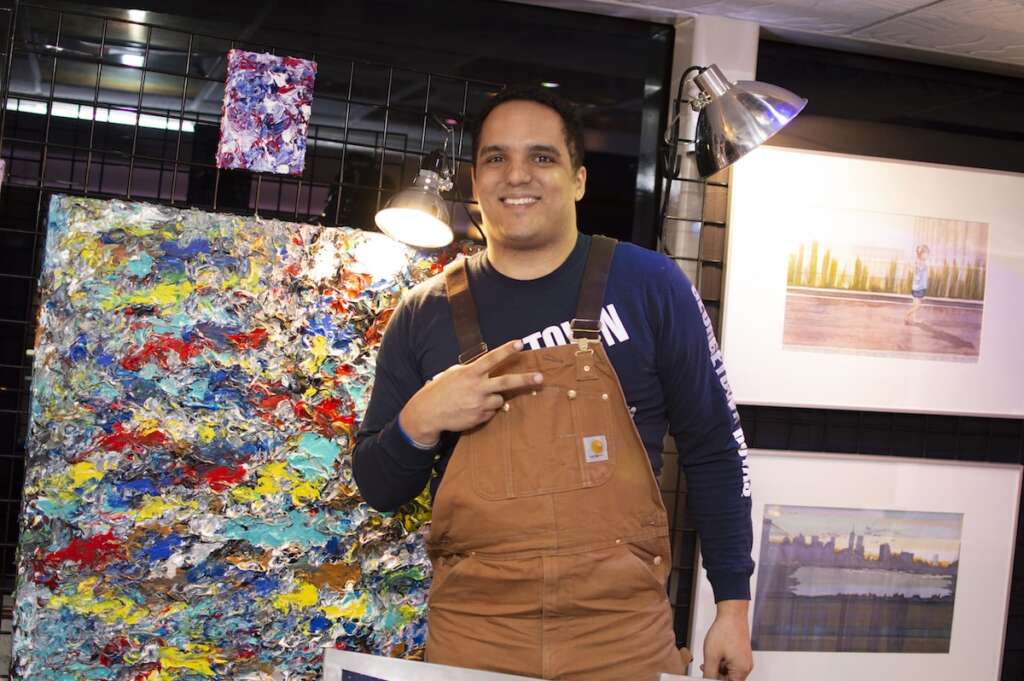 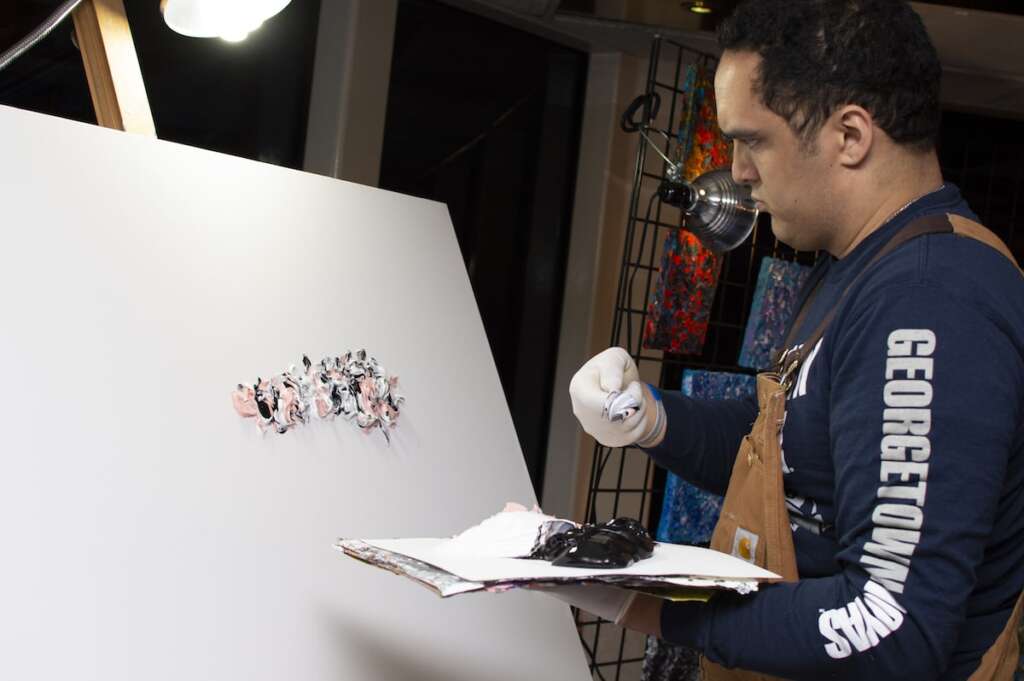 A few years later, he enrolled in art classes at Ohio University to decompress while pursuing a Master’s degree in Political Science, starting by painting with oil and, later, drawing with charcoal. There, he was tasked by professors to create only original art using his own imagination and talent, not by doing traditional basic painting teaching techniques, such as still lives or copying originals of other artists.

Maurice found himself continuing to pursue art as a relaxing hobby to counter the high stress of three years of law school in the USA, and took the major step of expanding into acrylics as a medium. He read the biographies of the world’s greatest artists, and adopted Matisse and Kandinsky as role models of lawyers who became artists, as he saw himself going down the same path. He developed his unique painting practice after reading a biography of Jackson Pollock. 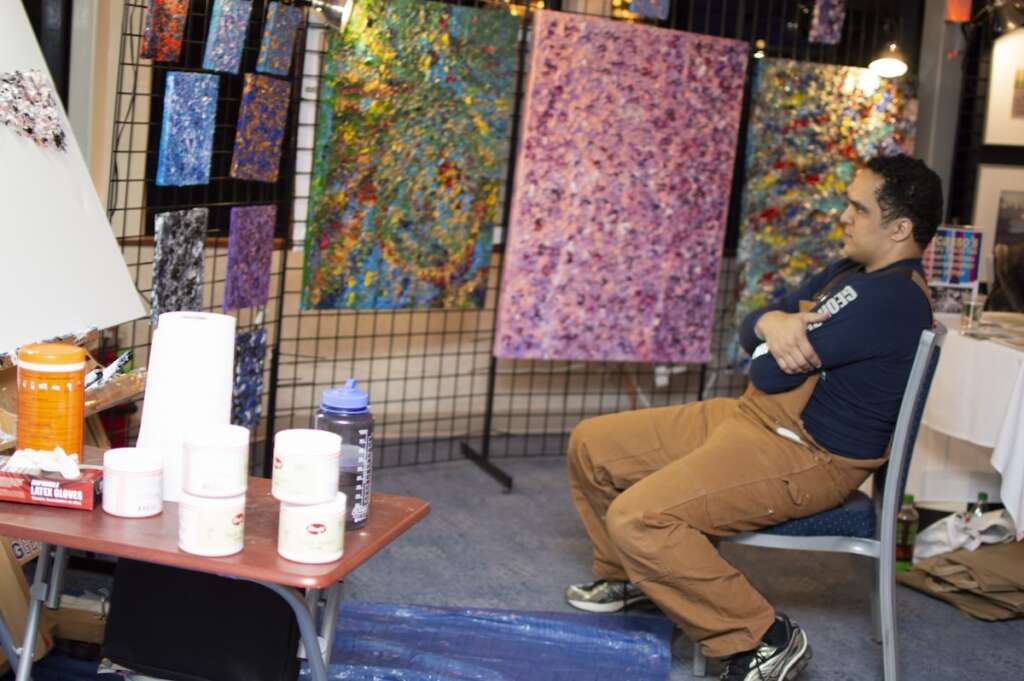 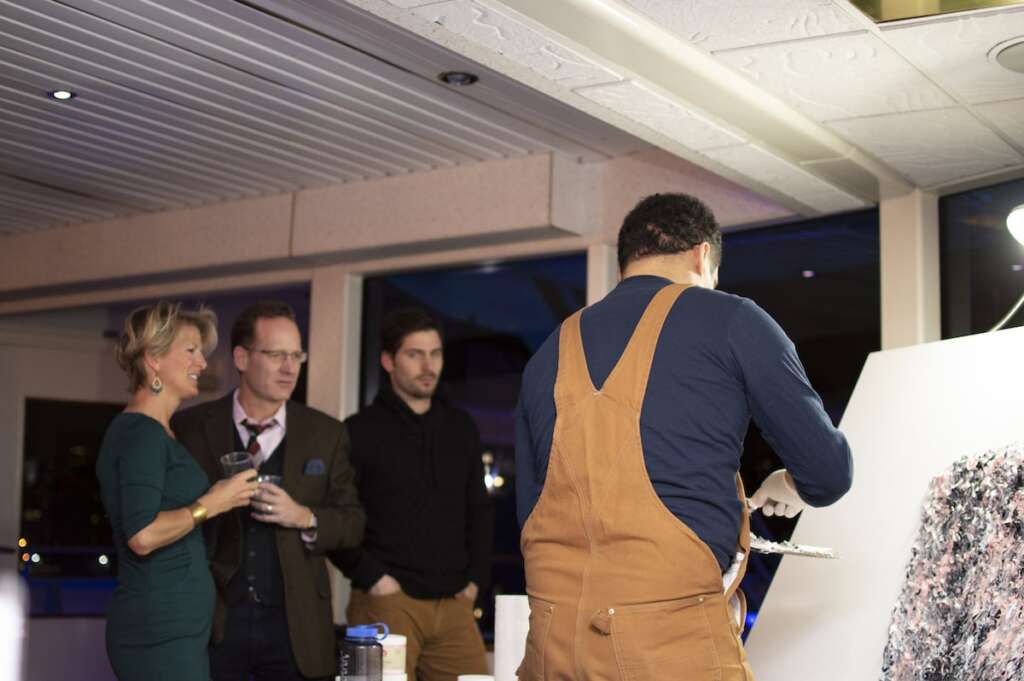 After graduating from law school, Maurice realized that his heart and passion were in creating artwork which would stimulate the mind in novel ways and tap into emotions of the viewer, as if in a dream-like world. He wanted to touch and expand how one sees the world, thereby delving into the world of abstract expressionism in addition to figurative art.

The now full-time professional artist, Maurice became an impasto abstract expressionist, using thick, luxurious layers of paint on a canvas, creating images that seem to jump out at the viewer from the frame. He encouraged the viewer to touch the artwork itself to become immersed in its emotive power, boundless energy, and imaginative force. The paintings welcome the viewer into the artist’s world and their own dream-like remembrances. Sight, touch, and the mind become one in absorbing the energy of the art. His artwork was selected for exhibitions in Manhattan and New York’s Hudson Valley. 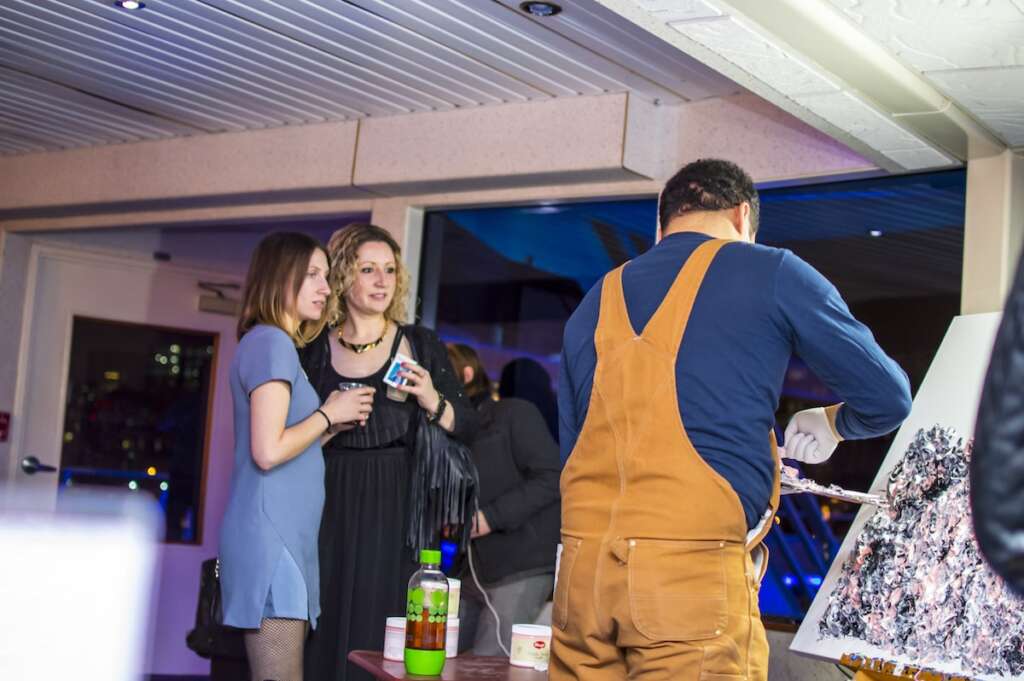 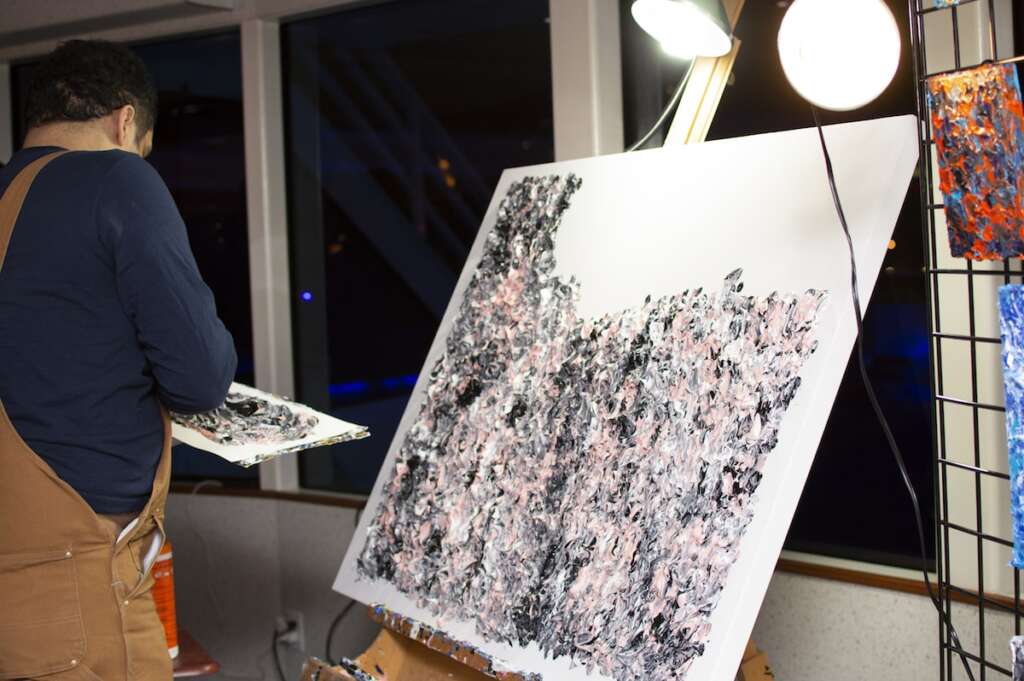 This above style of artwork was then transmitted to a new purpose: that of wearable art on clothing, dresses. accessories, handbags, shoes, scarves, t-shirts, and men’s wear. It formed the basis for an exciting fashion line called Perdreams, a combination of the artist’s surname of Perdreau, and “dream,” which connects to the evocative dream-like quality of his art. This online fashion business, Perdreams, has been in runway shows in NYC during New York Fashion Week and in Academy Award gifting suites in Hollywood at the Oscars.“

Perdreams combines art and fashion to create remarkable, one-of-a-kind pieces that stand out in a crowd. Unlike the rest of the fashion world, the brand wasn’t created by copying other designers. Instead, the designs are rooted in art. Created by artist Maurice Perdreau, the designs are original and unique and encourage those who wear them to live and follow their dreams, while feeling extraordinary.” (www.prweb.com)

One of the keys of evaluating Perdreau’s art is his philosophy of letting the viewer independently experience the work. Perdreau fights against modern conceptual art where the artist autocratically tells the viewer how they should think about the piece. If they have an opportunity to explain it at all. Perdreau believes that the beauty of art is in the eyes of the beholder and not the artist him or herself. Perdreau has a strong conceptual narrative; it stems from the subconscious mind letting the user interpret the piece as they would by interpreting ink blots in a psychological exercise that reveals the viewer’s true self.

Perdreau believes that artwork should be able to stand on its own without explanation with its own inherent aesthetics in order to speak to all viewers. Much of contemporary art is done by MFA artists that need extensive art education in order to understand the value and meaning of the piece. But what about the general public who cannot possibly understand the meaning of the work? What about the children who are just in the museum for the first time? What about the people who are completely turned off by conceptually based art? Don’t they deserve to be able to enjoy art? Why are artists saying that they don’t matter…that they aren’t even worth making art for?

Perdreau has just these few sentences to understand his art:

“I see you. You matter. I care what you think about art. To love art is everyone’s basic human right. I have created this work for you…all of you.”

In 2021, the British company producing Jet-Candy collaborated with Maurice to feature one of his hearts on its online calendar each month, launching his art into the world of marketing for businesses. 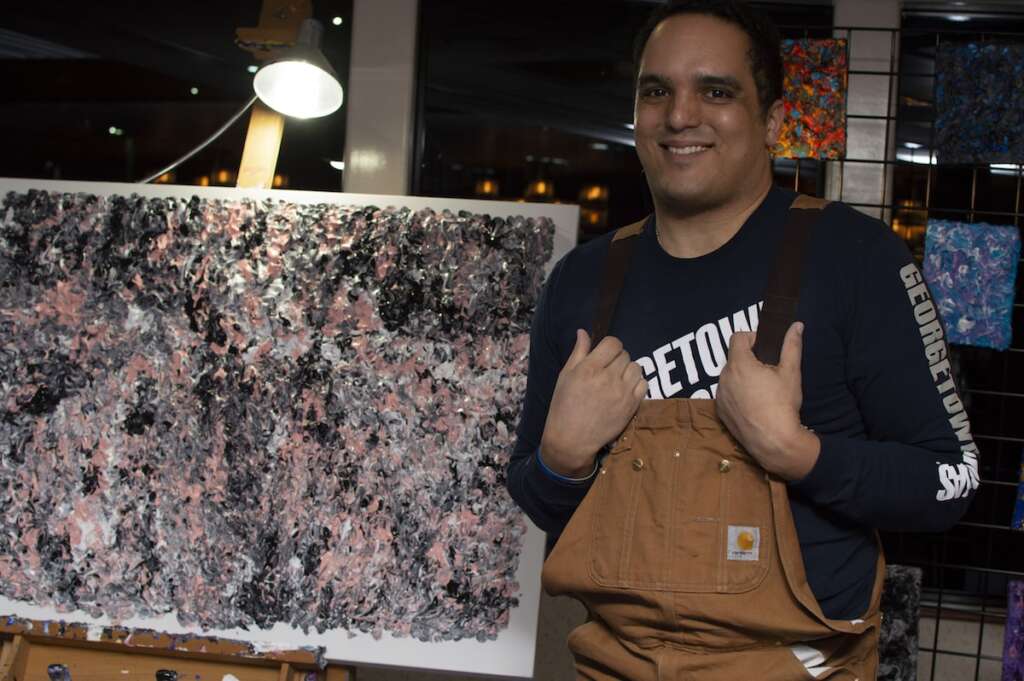 Want to be the best and the first informed?