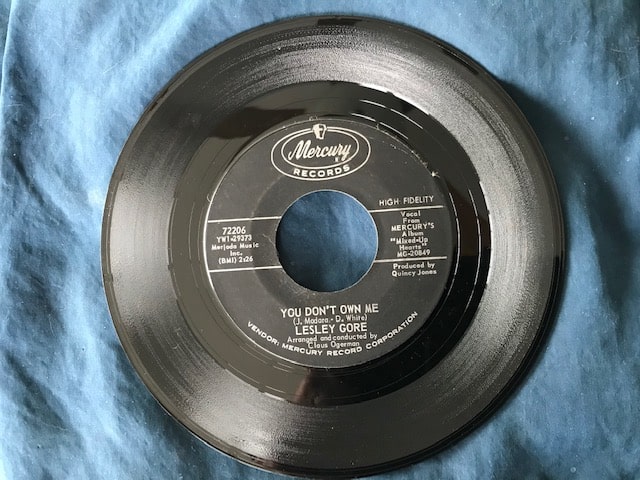 “You Don’t Own Me” is a popular song written by Philadelphia songwriters John Madara and David White and recorded by Lesley Gore in 1963 when Gore was 17 years old. The song was Gore’s second most successful recording and her last top-ten single.

On November 27, 2016, along with 24 other songs, the Grammy Hall of Fame announced its induction.

The song expresses emancipation, as the singer tells a lover that he does not own her, that he isn’t to tell her what to do or what to say, and that he is not to put her on display.

The song’s lyrics became an inspiration for younger women and are sometimes cited as a factor in the second-wave feminist movement.

“My take on the song was: I’m 17, what a wonderful thing, to stand up on a stage and shake your finger at people
and sing you don’t own me.”

In Gore’s obituary, The New York Times referred to “You Don’t Own Me” as “indelibly defiant”.

The original song recorded by Leslie Gore will be sold fractionalized into editions for NFT collectors to buy, each will have a unique digital fragment of the original music sheet. The sale will happen at KnownOrigin.io, one of the most relevant marketplaces to auction NFTs. An interesting way of owning a part of cultural history? Find out more here!

This revelation was possible due to the partnership of John Madara with VisionaryArt.io NFT Agency, a collective of artists and professionals involved in bringing inspiring art and protecting artist rights on the digital space.

John Madara, or Johnny Madara, was born in Philadelphia, Pennsylvania, in 1936. He is a American singer-songwriter and record producer who looks back to a vast range of successful songs.

You might remember titles such as Rock and
Roll is Here to Stay, The Fly and Sadie (The Cleaning Lady), which has become the biggest selling record in the history of
Australia, and has become their national anthem.

John teamed up with David White and Arthur Singer to write the international hit At the Hop (1957). On November 27, 2016, the song was announced to be inducted into the Grammy Hall of Fame. The artist worked with labels such as

Some of his most relevant creations appeared in soundtrack albums of American Graffiti, Woodstock, Grease, Hairspray, Dirty Dancing, and others. John Madara is nominated for the East Coast Music Hall of Fame, yet another Hall of Fame award to his vast collection.

You Don’t Own Me was also featured in several movies, such as Dirty Dancing (1987) Hairspray (1988), it was also covered in the last scene of The First Wives Club (1996), interpreted by Diane Keaton, Goldie Hawn, and Bette Midler. Later on, a cover of the song by SAYGRACE and G-Eazy was also featured on the movie Suicide Squad, a scene where Harley Quinn dances inside a prison cell.

Many artists keep mentioning and performing the song for its powerful message to women empowerment, including names as Ariana Grande, Madison Beer, Matt Terry, and by Charlotte Summers, a 13 years old singer who made it to the quarterfinals of America’s Got Talent.

The song is also a trending hit for TikTok influencers, counting with more than 50M performances since September 6th, 2021.

Learn more about the You Don’t Own Me NFT here.

Maria RebeloAugust 18, 20210Likes
Who remembers Commodore Amiga 500? And the 1000? Amiga was introduced to the world in 1985, by the home computers and electronics…
Read More